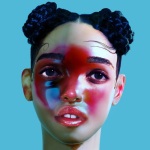 released in August 2014 via Young Turks

Nothing in the world could have prepared me for the intensity this album evoked from within. The magic of LP1 creeps over you slowly as it strangles your senses one by one. FKA twigs will envelop you in this living breathing monster she has created in a fashion similar to Dr. Frakenstien, grafting together various alternative genres that suit the situation. Like a surgeon makes exceptionally precise cuts and intelligent decisions with her tools, so does FKA twigs with all the artistic choices she exercises.

Enticing, exciting, and addicting… LP1 can be quite dangerous to fool around with if one does not prepare themselves properly. Try to remember these simple facts and stay calm:

1. This album is “for real”.
2. FKA twigs is of the human species and not some sort of ultra powerful angelic being.
3. Space-time is indeed still in tact and all this genre bending has not broken the universe.
4. FKA twigs is still criminally underrated, but you can help to change that!

I guarantee 2015 is going to be chalk full of FKA twigs wannabees just trying to channel even sliver of the enriching sound she has birthed. Without any acknowledgment to their true influence, there will also be a grand shift in style by artists of all walks of life. A dissemination, if you will, of freedom to tear down boundaries in music that have no obligation of being there.

So for the massive creative bombshell that is coming our way…
I’m truly thankful to FKA twigs.